by Shawn McBurnie (originally published in issue 6 of Trasna an Ghabhail, the newsletter of The Celtic Junction)

"From Ghoulies and Ghoosties, Lang-leggety Beasties, and Things that go bump in the night, Good Lord, deliver us." - Traditional charm, Cornwall and Scotland

The ghouls, ghosts, and fey creatures of the Celtic lands are fairly well known here in Minnesota; we’d know better than to climb on the back of a kelpie, for example. Nor are we strangers to the trolls of Scandinavia. What may come as a surprise is that we also have a homegrown Northwoods folklore of surprising invention and richness, and you may very well have encountered one or more of the 'Fearsome Critters' from this tradition yourself.

Most of us have been outdoors at night and seen a dim shape with bright glowing eyes. Sometimes this turns out to be a cat, skunk, or raccoon - but if it turns and disappears before you can make out details, what you've seen is, indubitably, a wunk. Unlike many Fearsome Critters, the wunk is common in populated areas and even ventures into cities from time to time. Its method of eluding predators is similar to that of the wombat of Australia, which quickly digs a burrow with its powerful claws and plugs the entrance with its armored backside. The wunk does the wombat one better - not content to leave any part of itself exposed, it reaches back and pulls the hole in after it, leaving no trace. (As if this were not enough, rumor has it that the wunk could change its shape if it wished, even to the point of passing for a human - but it never does.) 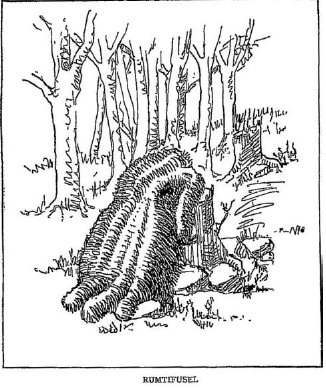 So what exactly are Fearsome Critters? They’re beasties, long-leggety and otherwise, that featured in tall tales told in logging, mining, or railroad bunkhouses; around trappers' fires; or anywhere frontier workers relaxed and swapped yarns. Familiar examples include snow snakes and the famed hodag of Rhinelander, Wisconsin. Rarely provable (or disprovable), even the large and dangerous ones tend to be shy, often making themselves known only indirectly. Most have at least one implausible feature, and many have attributes - like telescoping legs or gimbal-mounted extremities - that might have served as inspiration for mechanical advances had the mechanical equivalents not already existed. Here’s a brief introduction to a few of them.

The elastic-armed argopelter hides in the treetops, throwing dead limbs down on anyone who ventures too near. This habit was responsible for many casualties during the 19th and early 20th centuries, before helmets came into common use among loggers. More actively menacing is the hidebehind, who, as the name suggests, is glimpsed only momentarily as it moves from one hiding place to the next in the forest, following unwary loggers or hikers. Often, the hidebehind is only curious, and may be driven off by signs of vigilance (or, as one account has it, by whiskey fumes), but a hungry or angered one will abruptly snatch a victim away, never to be seen again.

Then we have the snow wasset, a chilling creature indeed in regions that need no further chilling. Described as an enormous ermine with no legs, the snow wasset is rarely seen beyond a flash of white fur against the snow as it surfaces to seize its prey. In its deep-snow tunnels, it awaits vibrations that tell it of unsuspecting passersby above. It then bursts upward to grab anything large enough to catch its interest, up to and including large bears and, on at least one occasion, a snowmobile. While proposed strategies of encircling a wasset and stabbing it through the snow seem doubtful at best, there are reports of northern First Nations people piloting white-furred skin canoes made from a single legless hide, which would indicate some successful method of capturing a wasset.

A less active - but no less dangerous - predator is the broad but skinny rumtifusel, which uses a strategy of hiding in plain sight: it drapes itself over a stump or a rock near a trail, in which position it bears a striking resemblance to a fur coat. When a curious (or cold!) person is tempted to try it on, he or she is promptly devoured. The rumtifusel, much less thin at this point, spits out balls of felted clothing and other inedibles and hides in order to digest in peace for a week or so. 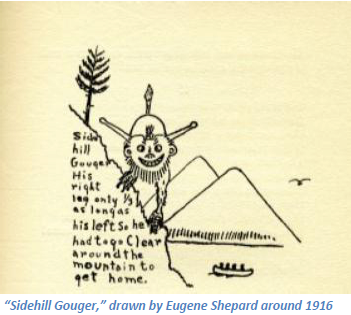 All of this is not to say that all Fearsome Critters are predatory or even frightening. Consider the sidehill gouger, a ruminant which has adapted uniquely to the steep slopes where it makes its home by growing the legs on its downhill side considerably longer than those uphill. It is perfectly suited to traveling in one direction, which leads to the 'gouges' of its name: deeply worn lateral trails on mountainsides. As one might guess, the gouger's case is hopeless if it should ever have a need to turn around. (The sheep in some regions have been interbred with gougers for more successful hillside grazing; Andy Tatham of Black Swan Explorations has been known to point these out.)

Like the argopelter, the treesqueak is a master of arboreal camouflage. As one might guess from the name, these shy creatures are heard but not seen. Their preferred nesting areas and singing spots are where the branches of two trees cross, and they are particularly vocal when the wind is blowing. Owing to the difficulty of catching a treesqueak, it was a logical object for the 'snipe hunts' that credulous green loggers were sent on - competing with the snipe itself, which varies widely (variously reported as feathered, furred, or both, on two, three, or four legs) but is universally uncatchable and rarely resembles the shorebird of the same name. 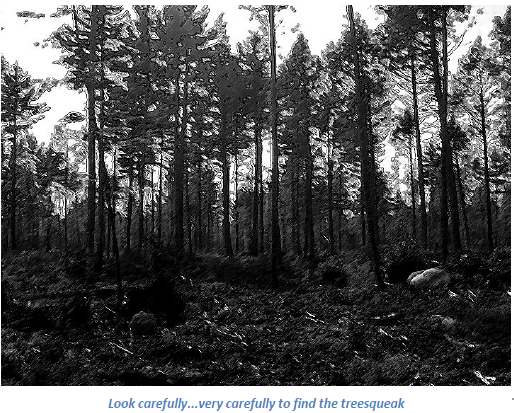 While most Fearsome Critters are indigenous to North America, there are exceptions. Most notable among these are the feral leprechauns, said to have emigrated from Ireland as a result of the Great Potato Famine, when even the wee folk went hungry at times. Unfortunately, the New World seems to have been less kind to these immigrants than to their human counterparts; they were notorious not only for their mischievous sense of humor - being blamed for tangles in horses' manes, tails, and tack - but also for their ragged appearance and ravenous appetites. A favorite tactic was to spook horses with heavily loaded sleighs of logs, sometimes causing spills, and to make off with any food items left unguarded in the resulting chaos. Happily, no such attacks have been reported since the late 1800s, so we can hope that they eventually found more congenial occupations.

The next time you’re in the Northwoods - or failing that, even in your own backyard - don’t dismiss the unlikely beasties you may glimpse in passing, and keep an ear out for treesqueaks and their fellow Fearsome Critters. The truth may be out there, but who’s to say the folklore isn’t more fun?

Shawn can be reached at holler@shawnmcburnie.com.